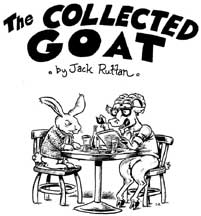 The goat stories began as something I would pass around to my literary friends, either to amuse or annoy them. In part, they arose from frustration with the situation as it exists for writers in Canada (and in general), but mainly it was my creating stories out of things that have happened to me in the Montreal and Calgary literary worlds.

The cartoons deal with two characters, Rabbit and Goat, both struggling writers. The Goat is the plodder, the one who tries to be nice to everyone. The Rabbit is borderline psychotic; an egomaniac. One or two people have accused me of modelling the rabbit after them, and I suppose he did pop up after a couple of incidents similar to those depicted inside, but these two are aspects of many writers I know, myself included.

While each page is a self-contained story, in future episodes I had hoped to knit them into a larger narrative revolving around two beings who detest each other, but whose lives were intertwined. Ideally, I would like it to be a modern version of the Hogarthian "Rake's Progress," or "Tale of the Idle and the Industrious 'Prentice."

Ten of these pages were published in Books In Canada Magazine over 1993-94. They also appeared in Matrix #50, and Fish Piss.